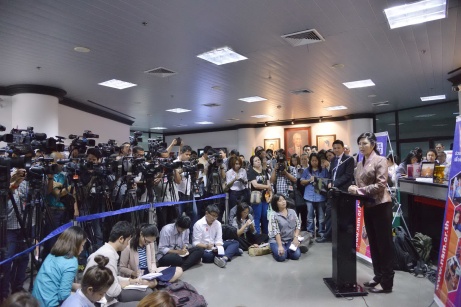 Thai PM speaking to reporters at the National Science Museum.

The caretaker cabinet held its weekly meeting today at the National Science Museum in Pathumthani province to consider a proposal of the National Security Council to extend the enforcement of internal security law (ISA) in Bangkok for 61 more days when it expires end of April.

The caretaker government still cannot return to the Government House to convene meetings because it is still under siege by the Network of Students and People for the Reform of Thailand which took over for almost six months. Under the proposal of NSC chief Lt Gen Paradorn Pattanathabutr, the extension will be from May 1 to June 30. The extension was based on intelligence report of possible violence as the result of confrontation of two rival groups, and interference by third party group.