Abhisit Vejjajiva is the leader of the Democrat Party who is facing murder charges of Red Shirt protesters during the violent crackdown in 2010. The central leadership decided on Saturday to not contest in the election, which has been set for February 2, 2014.

By avoiding the election, Abhisit has proven that the Democrats have lost their foothold in almost all the provinces of Thailand. It is a “face saving” technique. There is no conspiracy against them. They are in the losing end of democracy. As you already suspected, Abhisit’s hi-so connections and his fear of being around the public. Politicians like him have lost all decency.

As if to justify his actions, he said:

Thai politics is at a failed stage.

I agree but this is solely the fault of the Democrat Party. Ever since he lost in the last election, Abhisit was not able to regain his reputation. To make things worse for themselves, Suthep and him was charged for mass murder.

Yingluck Shinawatra has set out a three-step process for reform that required candidates to sign an agreement they would set up a national reform council once elected. The council would be comprised of leaders from various professions, institutions and political parties. The council would propose reforms during its two years of existence.

It is not that Yingluck does not want to introduce positive changes to the system. She does, like millions of Thais. It is crucial that rule of law is to follow the Constitution and the process of democracy. While Suthep, Abhisit and the Democrat Party boycotts the election, they do this so that they can avoid “losing face” – they have lost their moral credibility to claim the position of leadership. 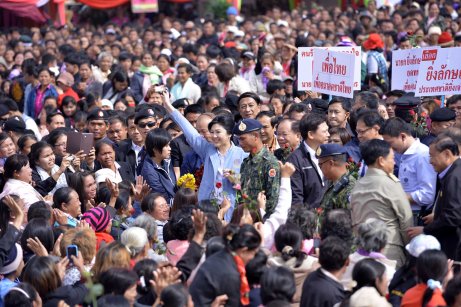 Yingluck waving to the crowd in the countryside of Thailand