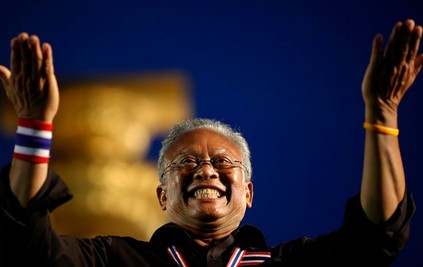 The cat is out of the bag, so to speak. Suthep, an ex-MP for the Democrat Party today demanded for absolute monarchy in Thailand. This is a complete contradiction to the objectives of the Democrat Party and what the Opposition Leader, Abhisit, has been saying all this while.

Does it come as a complete shock? Not really because many political analysts have speculated and theorized that senior members of the Democrat Party has been harboring a removal of democratic values.

If Thailand was to return to an absolute monarchy as what has been expressed by Suthep then it is best for his party to resign from Parliament and socially exile themselves from democracy. As for some of the Thammasat University students who wanted this all along, they got their wish.