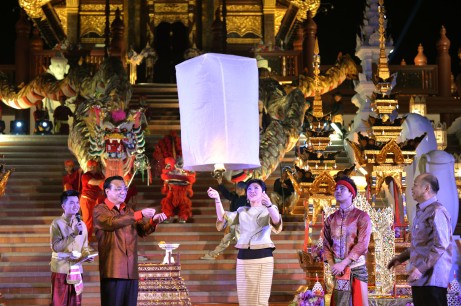 China and Thailand have charted the course for their future cooperation, so as to further develop the bilateral relations.

The two countries agreed that their relations have entered a new development stage since they forged the comprehensive strategic cooperative partnership in 2012, featuring greater potential and a vaster prospect for cooperation, according to the document.

The relationship has exceeded the bilateral level and unleashed fresh opportunities for carrying out strategic cooperation at regional and global levels.

China and Thailand have agreed on a multi-pronged proposal to advance bilateral pragmatic cooperation in various fields, in order to benefit the two peoples and make contributions to promoting peace, stability and prosperity of the region and the world at large.

The two countries decided to take concrete measures to implement the Joint Action Plan on China-Thailand Strategic Cooperation (2012-2016) and a memorandum of understanding (MoU) on cooperation on sustainable development, and to advance pragmatic cooperation in various fields, in the light of a joint declaration on establishing a comprehensive strategic cooperative partnership signed on April 19, 2012.

The two sides reiterated the target of increasing bilateral trade to 100 billion U.S. dollars by 2015. To this end, both agreed to strengthen economic and trade ties in the guidance of a five-year plan for economic and trade cooperation between the two sides, to realize the sustainable development of the two countries’ economies.

China said in the document that it stands ready to take part in the construction of a high-speed railway linking Nong Khai in northern Thailand and Phachi District near the capital city of Bangkok.

They are also willing to hold talks to sign an MoU on visa exemption for regular passport holders, in a bid to promote the tourism of both countries.

Regarding the South China Sea issue, both China and Thailand hold that disputes should be peacefully resolved by sovereign countries directly concerned through direct friendly consultation and negotiation based on international law.

Pending the final settlement, all relevant parties should shelve disputes and seek joint development of the sea.

China will work more closely with Thailand to effectively implement the Declaration on the Conduct of Parties in the South China Sea, and boost consultations on a code of conduct in the South China Sea based on the principle of consensus-building, so as to make it a sea of peace, friendship and cooperation.