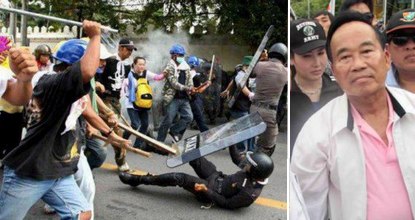 It is almost forgivable to mistaken the new self-styled “People’s Army” with the People’s Army of Vietnam. The Thai version of it comprises of Pitak Siam, People’s Alliance for Democracy, disgruntled members of Thai politics, Thai Patriots Network, communists and the V for Thailand “White Mask” group. They have agreed to join Pitak Siam’s 4 August rally to call for the removal of democratic process in Thailand and install their chosen political representatives.

During the 1st Pitak Siam’s rally, the former president, General Boonlert, of the neo-fascist movement had called upon the “freezing of Parliament” and the abolishing the Constitution. Now with the affiliation of the other groups, notably the V for Thailand, political experts are clear at the source of confrontational motivation and funding.

It does take political maneuvering and lots of Baht to mobilize an anti-democracy movement under the pretext of exercising democratic right.