Yingluck Shinawatra launched a new campaign against corruption. The Prime Minister pledged transparency and good governance in her government.

Cabinet members, permanent secretaries of all ministries, chiefs of all departments, heads of state enterprises, and high-level officials were present during the event in a show of solidarity and commitment.

She promised legal action against anyone involved in corrupt activities.

Complaints and reports of corruption can be filed via a phone hotline at 1206, and online at the government-sponsored website Stopcorruption.go.th.

The prime minister said her aim was to simplify the fight against graft by establishing a system of “one department, one anti-corruption plan”.

She said the project will lift Thailand out of its reputation for corruption, and place it “at an international level” through three steps.

– All government offices will be required to disclose to the public all hire and procurement procedures.

– Personnel must be properly selected and trained to oversee the hire and procurement procedures.

– A government committee will oversee a campaign to establish transparency in implementing all projects are in the public interest. 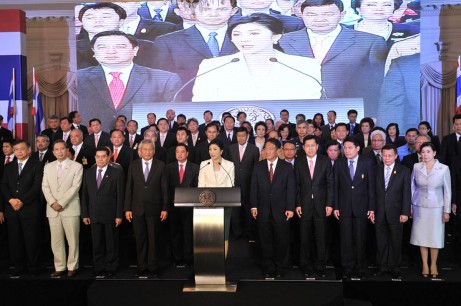 One thought on “Stop Corruption Campaign”