Yingluck Shinawatra gave a speech in Bangkok and paid tribute to the national athletes. 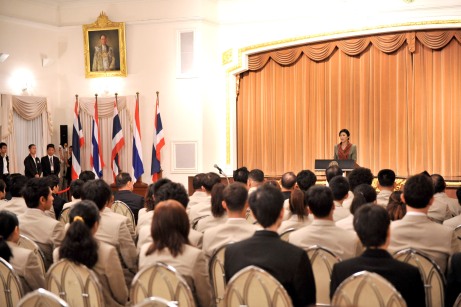 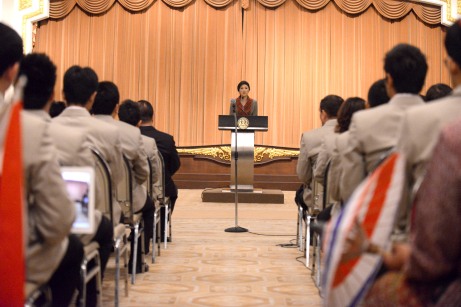 Prime Minister Yingluck Shinawatra told Thai athletes who will participate in the 4th Asian Indoor and Martial Arts Games in South Korea to focus on discipline and training in order to meet a success in their goal.

A squad of 177 athletes, led by President of the Thailand Olympic Committee General Yuthasak Sasiprapa, called on the Prime Minister at the Government House prior to their departure for the city of Incheon, South Korea, to participate in the 4th AIMAG during June 29-July 6, 2013.

In her address, Yingluck urged the players to maintain their discipline, take frequent practices, and follow rules of engagement. She reaffirmed the government’s commitment to promote the national sports segment, claiming that a budget is in place for the development of better quality coaches, facilities, and standards of all sports.

The 4th AIMAG features 100 events in nine sports. Leader of the national contingent Thana Chaiprasith said Thailand expects to win 13 golds in the games. Thai futsal team will be the first to compete in the tournament on June 26 against Vietnam in male and Bhutan in female matches.