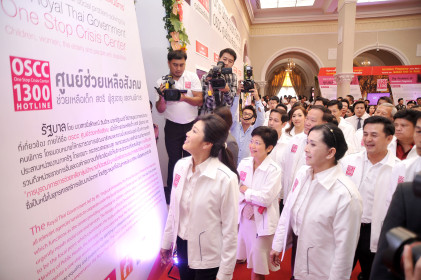 Prime Minister Yingluck Shinawatra has inaugurated the hotline 1300 of the OSCC or One-Stop Crisis Center, for assisting vulnerable members of the public.

Around 20,000 OSCC centers are due to be opened nationwide to provide comprehensive “one-stop” assistance to children, women, the elderly and people living with disabilities. The aim of the centers is to foster equality in society.

According to Ms. Yingluck, the social, economic and political developments that are taking place in Thailand have had effect on the Thai way of life, and the launch of the centers and the hotline can be considered a declaration of will by all collaborating agencies to hear the plights of the public and arrange for speedy, efficient and comprehensive assistance. She expects that the link between the centers and collaborating agencies will be up and running in 2 months’ time.

Ms. Yingluck also witnessed the signing of memorandums between the OSCC and various ministries and agencies that collaborate with the center. The prime minister also released a convoy of OSCC vehicles that visited sites such as Siam Square, Victory Monument and Hua Lamphong Station in Bangkok for the purpose of publicizing the initiative.