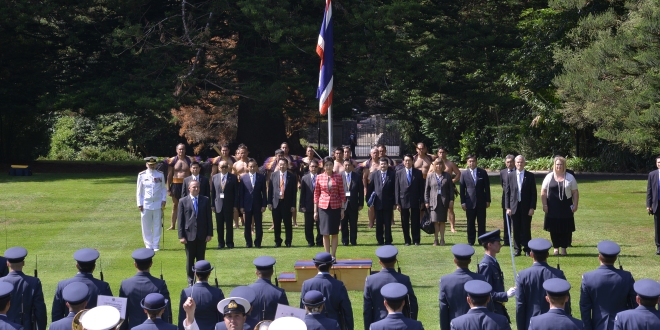 The official visit to New Zealand of PM Yingluck is aimed to strengthen bilateral relations on the occasion of the 57th anniversary of the diplomatic relations between Thailand and New Zealand (since 1956), and to boost confidence on Thailand’s political security and economic dynamism, as well as to expand cooperation in such significant fields to Thai economy and competitiveness as education, science and technology, innovation, labor, and agriculture.

The Thai Prime Minister met with the New Zealand premier for a bilateral meeting covering cooperation expansion in the areas of sciences, agricultural and food management, trade negotiation under the framework of TNZCEP Agreement, education, labor promotion, tourism and film industry, as well as partnerships within the region.

Yingluck will also extend an invitation to Prime Minister John Key to attend the 2nd Asia-Pacific Water Summit. Both premiers will join hands in supporting the roles of Thailand and New Zealand in the regional arena under the framework of such Agreements as ASEAN, EAS, and APEC, and will witness the signing ceremony of an MOU on mutual cooperation on education, and the letter of intent on the cooperation framework in science, technology, and innovation.

Of an interesting note, the Auckland University of Technology (AUT) will confer Yingluck with the honorary doctorate degree for her remarkable role in the international stages and the first elected female Prime Minister of Thailand.